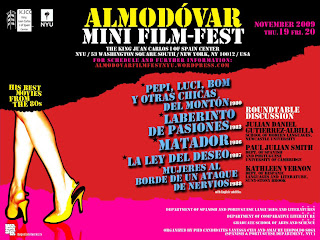 Thirty-five years and seventeen critically acclaimed full-length features after producing his first short film, Pedro Almodóvar arguably remains the most notable Hispanic director, and one of the most successful filmmakers in the world. Despite his renown for films such as Todo sobre mi madre (All About my Mother, Oscar for Best Foreign Language Film), Hable con ella (Talk to Her, Oscar for Best Original Screenplay) and his recent films La mala educación (Bad Education) and Volver (The Return), Almodóvar’s early films and shorts remain unknown to many. In celebration of his latest work, Los abrazos rotos (Broken Embraces), his most high-budgeted film to date, this two-day festival will look back to when it all began and showcase the Almodóvar of the late 1970s and 1980s’ so-called Movida Madrileña. This All About Almodóvar Mini-Film Festival, whose title acknowledges the most recent anthology of criticism on his work, includes screenings of the director’s first films, some of his overlooked shorts, as well as talks by Almodóvar specialists and Movida scholars.